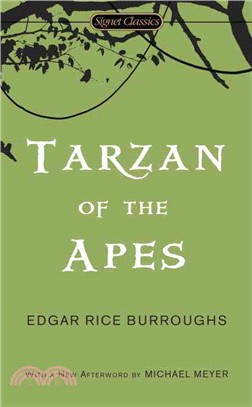 Recounts how Tarzan came to live in the jungle, was raised by a tribe of apes, and met and married American Jane Porter.

Edgar Rice Burroughs was born in Chicago, Illinois in 1875. After serving a short time in the 7th U.S. Cavalry, Burroughs was a shopkeeper, gold miner, cowboy, and policeman before becoming a full-time writer. His first novel, Tarzan of the Apes, was published in 1914, and along with its 22 sequels has sold over 30 million copies in 58 languages. Author of numerous other jungle and science fiction novels and novellas, including The Land That Time Forgot, Burroughs had a writing career that spanned almost 30 years, with his last novel, The Land of Terror, being published in 1941. He died in 1950 at his ranch near Tarzana, the California town named for his legendary hero.

Gore Vidal was born Eugene Luther Vidal in 1925, later adopting the surname of his grandfather, Senator Thomas Gore, as his first name. He is the author of numerous novels—the first, Williwaw, written when he was twenty-one—as well as scripts for film, television and the stage, including the extremely successful The Best Man and Visit to a Small Planet. He is perhaps best known for his historical novels, including Burr (1973), 1876 (1976), and Lincoln (1984). He won the National Book Award in 1993 for his book of essays, United States (1952-1992).