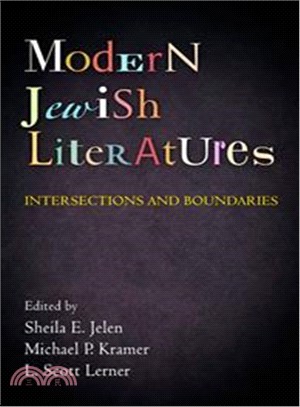 Is there such a thing as a distinctive Jewish literature? While definitions have been offered, none has been universally accepted. Modern Jewish literature lacks the basic markers of national literatures: it has neither a common geography nor a shared language—though works in Hebrew or Yiddish are almost certainly included—and the field is so diverse that it cannot be contained within the bounds of one literary category.

Each of the fifteen essays collected in Modern Jewish Literatures takes on the above question by describing a movement across boundaries—between languages, cultures, genres, or spaces. Works in Hebrew and Yiddish are amply represented, but works in English, French, German, Italian, Ladino, and Russian are also considered. Topics range from the poetry of the Israeli nationalist Natan Alterman to the Russian poet Osip Mandelstam; from turn-of-the-century Ottoman Jewish journalism to wire-recorded Holocaust testimonies; from the intellectual salons of late eighteenth-century Berlin to the shelves of a Jewish bookstore in twentieth-century Los Angeles.

The literary world described in Modern Jewish Literatures is demarcated chronologically by the Enlightenment, the Haskalah, and the French Revolution, on one end, and the fiftieth anniversary of the State of Israel on the other. The particular terms of the encounter between a Jewish past and present for modern Jews has varied greatly, by continent, country, or village, by language, and by social standing, among other things. What unites the subjects of these studies is not a common ethnic, religious, or cultural history but rather a shared endeavor to use literary production and writing in general as the laboratory in which to explore and represent Jewish experience in the modern world.