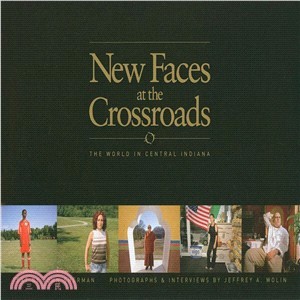 Until recently, central Indiana has not truly reflected the sheer diversity of races, religions, cultures, and ethnic backgrounds of the rest of the world. In recent decades and especially in the first years of the 21st century, however, cities, towns, and rural areas of the central portion of the Hoosier state have welcomed an increasing number of new residents who constitute a surprisingly broad and diverse cross section of world citizens.

To capture and celebrate these changes, New Faces at the Crossroadsfeatures portraits of 30 recent newcomers from around the world by award-winning photographer Jeffrey A. Wolin, accompanied by stories of why they came to the area and their perspectives on living there. Together with John Sherman's text describing changes and additions to the region's population, these striking photographs show that central Indiana is no longer just the Crossroads of America: It is the crossroads of the world.

Jeffrey A. Wolin is Ruth N. Halls Professor of Photography at Indiana University. His books include Written in Memory: Portraits of the Holocaust and Inconvenient Stories: Portraits of Vietnam War Veterans. His photographs are in the permanent collections of numerous museums. He lives in Bloomington, Indiana.

John Sherman is a writer, editor, and poet. His books include War Stories: A Memoir of Nigeria and Biafra and America Is a Negro Child: Race Poems. He is President of Sherman & Co. Public Relations in Indianapolis.