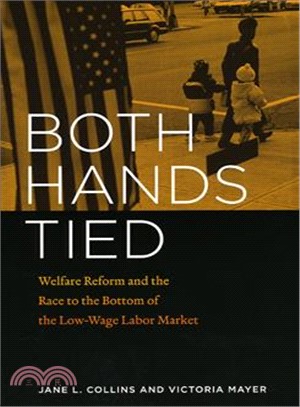 Both Hands Tied studies the working poor in the United States, focusing in particular on the relation between welfare and low-wage earnings among working mothers. Grounded in the experience of thirty-three women living in Milwaukee and Racine, Wisconsin, it tells the story of their struggle to balance child care and wage-earning in poorly paying and often state-funded jobs with inflexible schedules—and the moments when these jobs failed them and they turned to the state for additional aid.

Jane L. Collins and Victoria Mayer here examine the situations of these women in light of the 1996 national Personal Responsibility and Work Opportunity Reconciliation Act and other like-minded reforms—laws that ended the entitlement to welfare for those in need and provided an incentive for them to return to work. Arguing that this reform came at a time of gendered change in the labor force and profound shifts in the responsibilities of family, firms, and the state, Both Hands Tied provides a stark but poignant portrait of how welfare reform afflicted poor, single-parent families, ultimately eroding the participants’ economic rights and affecting their ability to care for themselves and their children.

Jane L. Collins is the Evjue Bascom Professor of Community and Environmental Sociology and Gender and Women’s Studies at the University of Wisconsin–Madison and the author of Threads: Gender, Labor and Power in the Global Apparel Industry, among other titles. Victoria Mayer is assistant professor of sociology at Colby College.