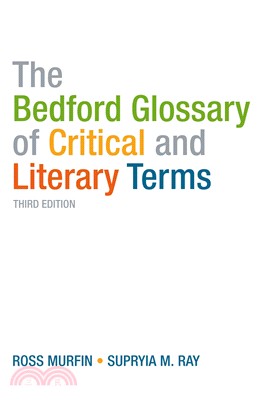 Engaging, authoritative, and affordably priced, The Bedford Glossary is a comprehensive reference that clearly and accessibly defines hundreds of important literary and critical terms from classical times to the present, making them real and relevant to?twenty-first century students through examples uniquely drawn from contemporary literary and popular culture.
Ross Murfin, E. A. Lilly Distinguished Professor of English and former provost at Southern Methodist University, has also taught at the University of Virginia; Yale University; and the University of Miami, where he was the dean of the College of Arts and Sciences until 1996. He is the author of Swinburne, Lawrence, Hardy, and the Burden of Belief (1978); The Poetry of D. H. Lawrence: Texts and Contexts (1983); Sons and Lovers: A Novel of Division and Desire (1987); and Lord Jim: After the Truth (1992); and the editor of Conrad Revisited: Essays for the Eighties (1983). The series editor of Bedford/St. Martins popular Case Studies in Contemporary Criticism, he has also edited two volumes in the series, Joseph Conrad’s Heart of Darkness (second edition 1996) and Nathaniel Hawthorne’s The Scarlet Letter (second edition 2006). Supryia M. Ray is a writer, editor, and English teacher. A summa cum laude graduate of the University of Miami, she has assisted Ross Murfin in the research and preparation of more than a dozen volumes in the Case Studies in Contemporary Criticism series and authored "Contextual Documents and Illustrations" for the second edition of The Scarlet Letter. She graduated magna cum laude from Harvard Law School in 1998, served as a law clerk on the U.S. District Court and the U.S. Court of Appeals, entered private practice as a litigator, and then performed public-interest environmental advocacy in Washington, D.C. She also served for two years with Literacy AmeriCorps, teaching adult learners a variety of subjects including English, reading, writing, and public speaking. She now divides her time between teaching and writing.
PrevNext