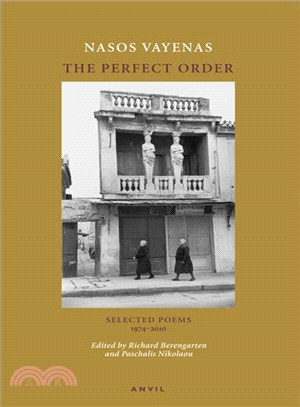 Nasos Vayenas' poems manifest a quality of alert intelligence that is always refreshing, bracing and vital. They have been widely published in small editions and magazines all over the English-speaking world. This selection of his poems covers various phases and tendencies in Vayenas' long and varied poetic oeuvre.
Nasos Vayenas: Nasos Vayenas was awarded the Greek National Poetry Prize in 2005. He was born in 1945 in the northern Greek city of Drama, and studied at the universities of Athens, Rome, Essex and Cambridge; there, he wrote The Poet and the Dancer, his acclaimed thesis on George Seferis, published in Greek in 1979. Eleven books of poems and one of imaginative prose have appeared since 1974, alongside several critical works. Since 1992, he has been Professor of Literary Theory and Criticism at the University of Athens, where he lives.

Richard Berengarten: Richard Berengarten (Burns) has lived in Greece, Italy, the UK, the USA and former Yugoslavia. He has published more than 20 books, mainly poetry and translations. In 1975, he launched and co-ordinated the first international Cambridge Poetry Festival.

Paschalis Nikolaou: Paschalis Nikolaou is Lecturer in Literary Translation at the Ionian University, Corfu, Greece. He is co-editor of Translating Selves: Experience and Identity between Languages and Literatures (Continuum, 2008).