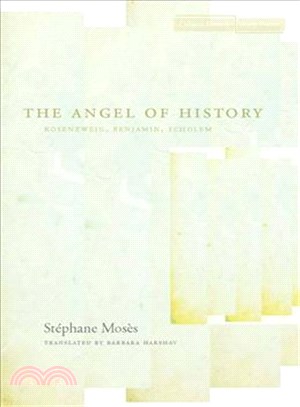 In The Angel of History, Mosès looks at three Jewish philosophers—Franz Rosenzweig, Walter Benjamin, and Gershom Scholem—who formulated a new vision of history in 1920s Germany by moving away from the spirit of assimilation and the Enlightenment belief in humanity's inevitable progress. Instead, they imagined history as discontinuous, made of moments that form no totality but whose ruptures are both more significant—and more promising—than any apparent homogeneity.

Their direct experience of the twentieth century's great upheavals led these three thinkers to abandon the old models of causality that had previously accounted for human experience, and their cultural and religious background allowed them to turn to the Jewish experience of history. Jewish messianism always had to confront the experience of catastrophe, deception, and failure. Mosès shows how this tradition informed a genuine Jewish conception of history in which redemption may—or may not—occur at any moment, giving a new chance for hope by locating utopia in the heart of the present.

The late philosopher and writer Stephane Moses emigrated to Israel in 1969, where he became the first head of the German department at the Hebrew University and founded the Franz Rosenzweig Research Center for German-Jewish Literature and Cultural History. He also played a considerable role in the reconstruction of French Judaism after the Shoah.
PrevNext