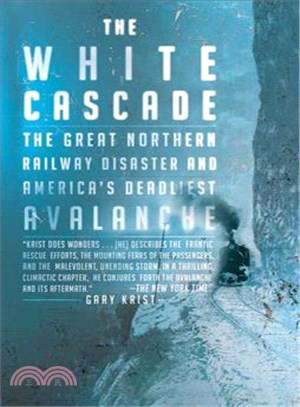 "In his first foray into nonfiction, novelist and short story writer Krist proves that you don't need an epoch-altering event—a Katrina or a Dust Bowl—to make an engrossing disaster narrative. In the hands of such a skilled and respectful writer, a week-long, late-winter snowstorm, stalled trains, and a cast of ordinary, unlucky people are more than enough to keep us turning pages . . . Krist's chapter on the aftermath of the avalanche—the blood-reddened snow, the ever-fainter cries for help, the heartbreak of a mother pinned on top of her slowly suffocating infant—is utterly gripping, all the more so for his restrained style. Equally riveting is the courtroom drama that ensues as two juries and then the Washington State Supreme Court determined whether God or the railroad was to blame . . . readers will love his . . . many digressions into the challenges, dangers and arrogance of sending fast trains through untamed mountain passes. The Wellington avalanche, like all natural disasters, was compounded by human frailty. Perhaps the signal contribution of The White Cascade is how deeply and delicately Krist probes the moral complexities of this fatal combination.”—David Laskin, The Washington Post

“Adopting a restrained, documentary tone, [Krist] slowly builds a picture of massing natural forces and helpless humanity, brought closer and closer to catastrophe with each tick of the clock. The pacing is expertly judged, and the potentially confusing narrative threads, involving multiple actors in scattered locations, are tied together neatly.”—William Grimes, The New York Times

“What a wild-eyed, horrific, brilliantly written story Gary Krist tells in The White Cascade. You almost feel like you’re a Great Northern Railway passenger in 1910, coping with the blizzard-from-hell. Jack London would be proud of this riveting nonfiction accomplishment.”—Douglas Brinkley, Professor of History at Tulane University and author of The Great Deluge: Hurricane Katrina, New Orleans, and the Mississippi Gulf Coast

“The White Cascade brilliantly recreates one of those terrifying moments when human ingenuity runs up against the fierce power of nature. Gary Krist doesn’t simply describe the Great Northern Railway Disaster. He takes you up the mountainside, settles you into the trapped Pullman car, and makes you feel the fear closing in around you.  That’s storytelling at its finest.”—Kevin Boyle, author of Arc of Justice: A Saga of Race, Civil Rights, and Murder in the Jazz Age

“It is always a great gift when someone tells a long forgotten story, but it is especially so when the drama is this astonishing, and the writer this talented. Gary Krist weaves a spider web of a tale, drawing the reader in, until they feel as though they too are a passenger on Seattle 25, trapped in one of the world’s most dangerous places, in one of history’s most savage storms. The White Cascade will keep you up at night, and not just from its unsettling end—you won’t be able to put it down.”—Susan Casey, author of The Devil’s Teeth

“In February 1910, a massive blizzard trapped two trainloads of passengers high in the Cascade Mountains. Crews from the Great Northern Railway worked around the clock to rescue the trains stranded on the edge of a precipice near Wellington, Washington. Then an avalanche half a mile wide descended from the pinnacles, forcing the trains and their passengers down the mountainside. Bodies were scattered all over the area, some buried as deep as 40 feet. The last body was found in July, 21 weeks after the avalanche. The lost passengers included business leaders, women, and children, but nearly two-thirds of the 96 fatalities were trainmen, railway mail clerks, and track laborers. Many others were injured and a few were unharmed. Krist's research includes documents such as telegrams and diaries, newspaper articles of the time, court affidavits, and corporate archives. To his credit, Krist has avoided using any invented dialogue or other undocumented re-creations. The book is an astonishingly rich chronicle of this catastrophe.”—George Cohen, Booklist

“In 1910, two Great Northern Railway trains became trapped by snow slides in the Cascade Mountains of Washington State. After several days of impasse, an avalanche hit the trains, taking nearly 100 lives. Using court testimony, diaries, letters, and other documents, journalist and novelist Krist describes in painstaking detail the turmoil of the trapped passengers and crew and the efforts of the railway to free them. He provides sufficient background history on the Great Northern's procedures and on snow conditions in the Cascades for the reader to understand the situation fully. Krist centers the story on the actions of indefatigable Cascade division superintendent James H. O'Neill, whose decisions, all based on his best railroad judgment, ultimately led to the tragedy. This real-life thriller compares well to Erik Larson's Isaac's Storm and is a gripping book to curl up with (though maybe not on a snowy winter's night).”—Lawrence R. Maxted, Gannon University, Erie, Pennsylvania, Library Journal

“With thorough reporting and easy, readable prose . . . Novelist Krist turns to nonfiction for a familiar tale of Man-vs.-Nat

Gary Krist is the prizewinning author of the novels Bad Chemistry, Chaos Theory, and Extravagance, and of two short-story collections, The Garden State and Bone by Bone. His stories, articles, and travel pieces have been featured in noteworthy magazines, including National Geographic Traveler, GQ, and Esquire. He lives in Bethesda, Maryland, with his wife and daughter.
PrevNext