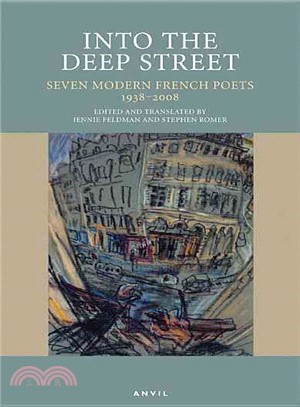 Contemporary French poetry has long been tagged as being overly cerebral and hermetic. As if by way of corrective, there exists a very different, thriving tradition that's often muffled by noisier movements like Surrealism or Minimalism. This anthology intends to give voice to this tradition.
Jennie Feldman studied French at Oxford. Her selection of poems by the French poet Jacques Reda, Treading Lightly, was published by Anvil in 2005 as was her highly praised first collection, The Lost Notebook. A former award-winning producer and presenter of radio documentaries, she also translates Hebrew poetry and teaches creative writing. She lives in Jerusalem. Stephen Romer was born in 1957 and educated at Cambridge. He has been senior lecturer ("Maitre de conferences") at the University of Tours since 1991. He has translated widely from modern and contemporary French poetry, and his anthology 20th Century French Poems (Faber) was published in 2003. The author of four collections of poetry, his latest, Yellow Studio, appeared in 2008.
PrevNext