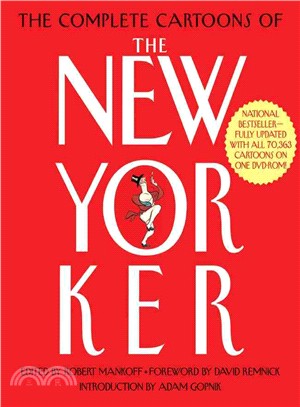 The book that Janet Maslin of The New York Times has called "indispensable" and "a transfixing study of American mores and manners that happens to incorporate boundless laughs, too" is finally available in paperback—fully updated and featuring a brand new introduction by Adam Gopnik.

Organized by decade, with commentary by some of the magazine's finest writers, this landmark collection showcases the work of the hundreds of talented artists who have contributed cartoons over the course ofThe New Yorker's eight-two-year history. From the early cartoons of Peter Arno, George Price and Charles Addams to the cutting-edge work of Alex Gregory, Matthew Diffee and Bruce Eric Kaplan (with stops along the way for the genius of Charles Barsotti, Roz Chast, Jack Ziegler, George Booth, and many others), the art collected here forms, as David Remnick puts it in his Foreword, "the longest-running popular comic genre in American life."

Throughout the book, brief overviews of each era's predominant themes—from the Depression and nudity to technology and the Internet, highlight various genres of cartoons and shed light on our pastimes and preoccupations. Brief profiles and mini-portfolios spotlight the work of key cartoonists, including Arno, Chast, Ziegler, and others.

The DVD-ROM included with the book is what really makes the "Complete Cartoons" complete. Compatible with most home computers and easily browsable, the disk contains a mind-boggling 70,363 cartoons, indexed in a variety of ways. Perhaps you'd like to find all the cartoons by your favorite artist. Or maybe you'd like to look up the cartoons that ran the week you were born, or all of the cartoons on a particular subject. Of course, you can always begin at the beginning, February 21, 1925, and experience the unprecedented pleasure of reading through every single cartoon ever published in The New Yorker.

Enjoy this one-of-a-kind protrait of American life over the past eight decades, as captured by the talented pens and singular outlooks of the masters of the cartoonist's art.
ADAM GOPNIK has been writing for The New Yorker since 1986. His work for the magazine has won the National Magazine Award for Essay and Criticism and the George Polk Award for Magazine Reporting. From 1995-2000, Gopnik lived in Paris, where the newspaper Le Monde praised his "witty and Voltairean picture of French life." He now lives in New York with his wife, Martha Parker, and their two children, Luke and Olivia.
Robert Mankoff is the cartoon editor of The New Yorker and the founder and president of the Cartoon Bank. He is an accomplished cartoonist, the author ofThe Naked Cartoonist, and the editor of The New Yorker Book of Cartoon Puzzles and Games (both from Black Dog & Leventhal), as well as many cartoon collections. He lives in Hastings, New York.
PrevNext