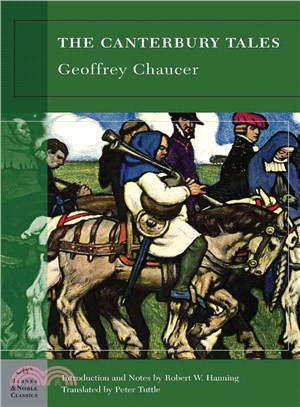 The Canterbury Tales, by Geoffrey Chaucer, is part of the Barnes & Noble Classics series, which offers quality editions at affordable prices to the student and the general reader, including new scholarship, thoughtful design, and pages of carefully crafted extras. Here are some of the remarkable features of Barnes & Noble Classics: New introductions commissioned from today's top writers and scholars Biographies of the authors Chronologies of contemporary historical, biographical, and cultural events Footnotes and endnotes Selective discussions of imitations, parodies, poems, books, plays, paintings, operas, statuary, and films inspired by the work Comments by other famous authors Study questions to challenge the reader's viewpoints and expectations Bibliographies for further reading Indices & Glossaries, when appropriateAll editions are beautifully designed and are printed to superior specifications; some include illustrations of historical interest. Barnes & Noble Classics pulls together a constellation of influences—biographical, historical, and literary—to enrich each reader's understanding of these enduring works.
Pilgrims on their way to worship at the shrine of Saint Thomas à Becket in Canterbury stop at the Tabard Inn. Representing a cross-section of medieval English society, the group includes a knight and his squire, a prioress, a friar, a miller, and a wife. To amuse themselves on their journey, they agree that each will tell a tale. These stories—by turns bawdy, hilarious, scurrilous, romantic, heroic, and moving—reveal a great deal about the tellers and the world they live in, which, despite the distance of six hundred years, seems remarkably like our own. Indeed, the structure of The Canterbury Tales and the sophisticated, intricate interplay between the stories, their narrators, and the general narrator (himself a complex comic character) give the book its strikingly modern flavor.

Often called the first book of poetry written in English, Chaucer’s masterpiece is also the first anthology of English short fiction, one that will resonate with readers for as long as folly and courage, deceit and generosity, love and jealousy remain part of the human personality.

Robert W. Hanning is Professor of English at Columbia University, where he has taught since 1961. He has published The Vision of History in Early Britain, The Individual in Twelfth-Century Romance, The Lais of Marie de France (co-translated with Joan Ferrante), and Castiglione: the Ideal and the Real in Renaissance Culture (co-edited with David Rosand), as well as many articles on Chaucer’s poetry and other medieval and Renaissance subjects.

Peter Tuttle's most recent poetry is Looking for a Sign in the West, published by Back Short in 2003.