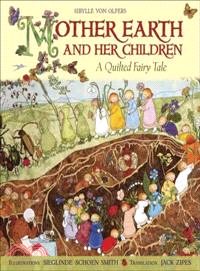 The incredibly intricate and vivid illustrations in this book are details of a modern quilt inspired by Sibylle von Olfers' classic storybook Mother Earth and Her Children. This vibrant new translation, in turn inspired by the quilt, explores the changing of the seasons and delicately touches upon the circle of life. When Mother Earth calls her children to prepare for spring, the earthly children yawn and stretch before they busy themselves with beautification. They dust off the bumblebees, scrub the beetles, paint bright new coats on the ladybugs, and rouse the caterpillars from their cocoons. Bedecked with new blossoms, the children emerge from the earth and become spring flowers that frolic through the summer and autumn, until the leaves begin to fall and they return to Mother Earth, bringing the weary bugs and beetles back to their winter refuge.
Sibylle von Olfers is the author of Etwas von den Wurzelkindern and was an art teacher in East Prussia at the turn of the century as well as a member of the Catholic Order of St. Elizabeth. Sieglinde Schoen-Smith is a quilter whose quilted interpretation of Mother Earth and Her Children captured the coveted Best in Show award at the 2006 International Quilt Show in Houston. She lives in Carlisle, Pennsylvania. Jack Zipes is the foremost expert on German folklore in the United States. He is a professor of German literature at the University of Minnesota and has edited, contributed to, and translated more than 50 books, essays, and plays on German folklore, including The Norton Anthology of Children's Literature and The Oxford Companion to Fairy Tales. He lives in Minneapolis, Minnesota.
PrevNext