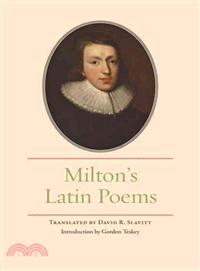 While Milton is recognized as one of the most learned English poets in history, his Latin poetry is less well known. Slavitt’s careful rendering brings Milton’s Latin poems—many written in his late teens—into the present. He keeps true to the style of the originals, showing Milton’s maturing poetic voice and the freedom he found working in Latin.

On the Gunpowder PlotO, sly Guy Fawkes, you plotted against your king and the British lords, but did you intend to be kindand make up for your malice in this thing with at least a show of piety? Do we findan intention, perhaps, of sending the members of court up to the sky in a chariot made of firethe way Elijah traveled. Or do I distort the simple wickedness of your desire?

Featuring an introduction by Gordon Teskey, this comprehensive English-language collection of Milton’s Latin poems pays due respect to a master. Poetry lovers, Milton fans, and scholars of either will welcome, enjoy, and learn from this work.

David R. Slavitt, poet, novelist, critic, and journalist, has published more than ninety books. He is coeditor of the Johns Hopkins Complete Roman Drama in Translation series and the Penn Greek Drama series. His translations include The Latin Eclogues, The Book of Lamentations, and The Voyage of the Argo, all published by Johns Hopkins. Gordon Teskey is a professor of American and English literature at Harvard University and the author of Delirious Milton: The Fate of the Poet in Modernity.