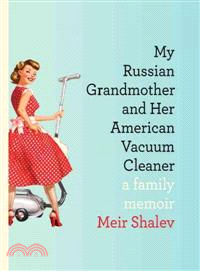 From the author of the acclaimed novel A Pigeon and a Boy comes a charming tale of family ties, over-the-top housekeeping, and the sport of storytelling in Nahalal, the village of Meir Shalev’s birth. Here we meet Shalev’s amazing Grandma Tonia, who arrived in Palestine by boat from Russia in 1923 and lived in a constant state of battle with what she viewed as the family’s biggest enemy in their new land: dirt.

Grandma Tonia was never seen without a cleaning rag over her shoulder. She received visitors outdoors. She allowed only the most privileged guests to enter her spotless house. Hilarious and touching, Grandma Tonia and her regulations come richly to life in a narrative that circles around the arrival into the family’s dusty agricultural midst of the big, shiny American sweeper sent as a gift by Great-uncle Yeshayahu (he who had shockingly emigrated to the sinful capitalist heaven of Los Angeles!). America, to little Meir and to his forebears, was a land of hedonism and enchanting progress; of tempting luxuries, dangerous music, and degenerate gum-chewing; and of women with painted fingernails. The sweeper, a stealth weapon from Grandpa Aharon’s American brother meant to beguile the hardworking socialist household with a bit of American ease, was symbolic of the conflicts and visions of the family in every respect.

The fate of Tonia’s “svieeperrr”—hidden away for decades in a spotless closed-off bathroom after its initial use—is a family mystery that Shalev determines to solve. The result, in this cheerful translation by Evan Fallenberg, is pure delight, as Shalev brings to life the obsessive but loving Tonia, the pioneers who gave his childhood its spirit of wonder, and the grit and humor of people building ever-new lives.

One of Israel’s most celebrated novelists, Meir Shalev was born in 1948 on Nahalal, Israel’s first moshav. His books have been translated into more than twenty-five languages and have been best sellers in Israel, Holland, and Germany. Honors he has received include the National Jewish Book Award and the Brenner Prize, one of Israel’s top literary awards, for A Pigeon and a Boy. A columnist for the Israeli daily Yedioth Ahronoth, he lives in Jerusalem and in the north of Israel.