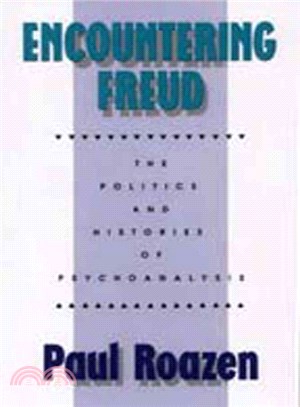 In a disarming opening statement, Paul Roazen notes that "one element the appeal of Freud remains the same: it is appallingly easy to be original in this whole subject." The magic of this volume is the author's involvement in both self-analysis and critical analysis at the same time. So the title refers not to any specific physical meeting with Freud, but with the author's intellectual encounters with the subject over the past two decades.

The volume's unique insight into Freud has a level of importance not found in the literature since Phillip Rieff's book on Freud some thirty years ago. In rapid succession, Roazen examines the different national responses to Freud; the beginnings of psychoanalysis; old-world and American contexts of receptivity and antipathy. He then examines Freud and the questions of law, society, class, and other forms of psychology. The work concludes with a sharp focus on Freud and his followers and dissenters, exploring the question of political psychology at one end and psycho-history at the other end of analysis.

Roazen concludes with a brilliant essay on Freud and the question of psychoanalysis's contribution radical thought in contrast to the conservative tradition. He takes up the extravagant claims of Marcuse and Reich, and sees the risks of overglamorizing the beginnings of psychoanalysis as a profession. Roazen views the legacies of Harry Stack Sullivan, Helene Deutsch, and Erik H. Erikson as less rich because their work reflected a powerful strain of conformance to the social status quo. He sees Freud's inability to avoid an ambiguous outcome as a lack of concern with normality and a refusal to won up to the wide variety of psychological solutions he found both therapeutically tolerable and humanly desirable.

Roazen concludes with a series of explorations on the dichotomies Freud left behind: clinical discoveries versus philosophical standpoints; the relationship of normality to nihilism; a defense of a therapeutic setting resting on the assistance of trained specialists versus a therapeutic approach encouraging self-expression. This is a volume of mature analysis on the social, political, and philosophical implications of psychoanalysis.

Paul Roazen is professor of political science at York University, in Toronto, Canada. His books include Freud: Political and Social Thought; Brother Animal: The Story of Freud and Tausk; Freud and His Followers; Erik H. Erikson; The Power and Limits of a Vision; Helene Deutsch: A Psychoanalyst's Life. He is the editor of the History of Ideas series for Transaction Publishers.