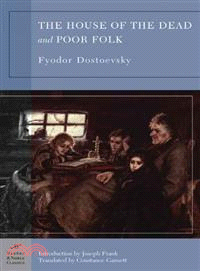 The House of the Dead and Poor Folk, by Fyodor Dostoevsky, is part of the Barnes & Noble Classics?series, which offers quality editions at affordable prices to the student and the general reader, including new scholarship, thoughtful design, and pages of carefully crafted extras. Here are some of the remarkable features of Barnes & Noble Classics:
All editions are beautifully designed and are printed to superior specifications; some include illustrations of historical interest. Barnes & Noble Classics pulls together a constellation of influences?biographical, historical, and literary?to enrich each reader's understanding of these enduring works.

Arrested in 1849 for belonging to a secret group of radical utopians, Fyodor Dostoevsky was sentenced to four years in a Siberian labor camp?a terrible mental, spiritual, and physical ordeal that inspired him to write the novel The House of the Dead.

Told from the point of view of a fictitious narrator?a convict serving a ten-year sentence for murdering his wife?The House of the Dead describes in vivid detail the horrors that Dostoevsky himself witnessed while in prison: the brutality of guards who relish cruelty for its own sake; the evil of criminals who enjoy murdering children; and the existence of decent souls amid filth and degradation. More than just a work of documentary realism, The House of the Dead also describes the spiritual death and gradual resurrection from despair experienced by the novel’s central character?a reawakening that culminates in his final reconciliation with himself and humanity.

Also included in this volume is Dostoevsky’s first published work, Poor Folk, a novel written in the form of letters that brought Dostoevsky immediate critical and public recognition.