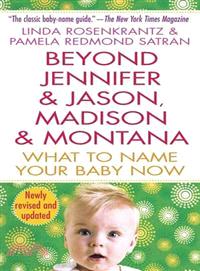 For years, expectant parents have relied on Beyond Jennifer & Jason as the baby-naming Bible. Now this classic bestseller has been updated for the new millennium, with 95% new material, including new chapters, new trends, new naming pitfalls, and more boy and girl names than ever-from traditional to trendy, and everything in-between, plus a comprehensive name index. Going beyond stale baby-naming books that simply list names and their meanings, Beyond Jennifer & Jason, Madison & Montana uniquely identifies the trends, styles, and connotations in today's baby-naming game. Look inside for...

Pamela Redmond Satran is a contributing editor for Parenting magazine and a columnist for Glamour. She lives in Berkeley, California.

As authorities on baby names, they write a column for Baby Talk magazine, have been quoted in People, The Wall Street Journal, and The New York Times Magazine, and have made appearances on nationally syndicated television shows such as Oprah and The Leeza Show, and on CNN Morning News. Their baby-name books have sold more than 600,000 copies.