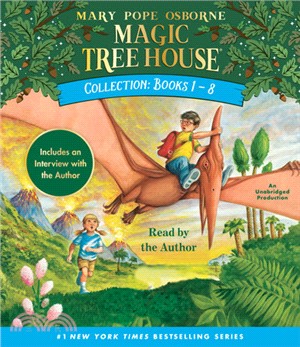 Jack and his younger sister, Annie, are just regular kids. But when they discover a tree house in the woods, something magical happens. In books 1-4, Jack and Annie are whisked back in time to the Age of Dinosaurs, a medieval castle, ancient pyramids, and treasure-seeking pirates. In books 5-8, Jack and Annie's friend, Morgan le Fay, is in trouble! They must find four "M" things to free her from a spell. Their adventures take them to meet a ninja master in ancient Japan, flee a crocodile on the Amazon River, discover the cave people of the Ice Age, and blast off to the moon in the future. It's a difficult and dangerous mission, but Jack and Annie will do anything to save a friend!

Mary Pope Osborne brings together just the right combination of history, magic, and fast-paced adventure to satisfy kids, parents, teachers, and librarians all over the world with her New York Times bestselling series.

"Osborne's narration is low-key and well-paced. A great way to introduce children who are reluctant readers or can't yet read to this highly entertaining book series and to reading in general."--Chicago Parent

Jack and his younger sister, Annie, stumble upon a tree house filled with books. Before Jack and Annie can figure out the mystery of the tree house, it whisks them back to the prehistoric past. Now they have to figure out how to get home. Can they do it before dark, or will they be become a dinosaur's dinner?

The Knight at Dawn
Peacocks for dinner and boys in skirts. That's what Jack and Annie find when the Magic Tree House transports them back to the Middle Ages for another wild adventure. They find themselves in the middle of an enormous castle and can hear the beginnings of a feast under way in the Great Hall. But Jack and Annie aren't exactly welcome guests!
Mummies in the Morning
Jack and Annie don't need another mummy. But that's what they get when the Magic Tree House whisks them back to ancient Egypt after reading a book on the same subject. There they find themselves in a pyramid face to face with a long dead queen named Hutepi. Will Jack and Annie be able to help her, or will they end up as mummies themselves?

Pirates Past Noon
It's a veritable treasure trove of trouble when the Magic Tree House carries Jack and Annie back to the days of deserted islands, secret maps, and dangerous pirates! Will they discover the hidden buried treasure, or will they face the possibility of walking the plank? Night of the Ninjas
Have you ever met a real live ninja? Jack and Annie do when the Magic Tree House whisks them back to ancient Japan in search of enchantress Morgan le Fay. When they arrive, they find themselves in the cave of a ninja master. Will they learn the secrets of the ninja? Or will the evil samurai warriors get them first ?

Afternoon on the Amazon
Vampire bats and killer ants? That's what Jack and Annie are about to run into when the Magic Tree House whisks them back in time to a South American Rain Forest in search of the elusive Morgan le Fay. It's not long before they get hopelessly lost on the Amazon River. Will they be able to find their way back to the tree house before they are trampled by stampeding killer ants? Sunset of the Sabertooth
The Ice Age is very cool...for two kids in bathing suits! Jack and Annie nearly freeze when the Magic Tree House whisks them back into the time of cave people and woolly mammoths. But nothing can stop them from having another wild adventure-not even a sabertooth tiger!
Midnight on the Moon
Three...two...one...BLAST OFF! The Magic Tree House whisks Jack and Annie off to the moon-and the   future.   Their mission? To find the last "M" thing that will free Morgan from the spell. Can they do it before the air in their oxygen tank runs out? Will they mysterious moon man help them? And   why   is Peanut the mouse acting so strange?

Mary Pope Osborne is the award-winning author of more than forty books for young people. She is is the reader for this gift edition as well as her previous Magic Tree House Collections available from Listening Library.