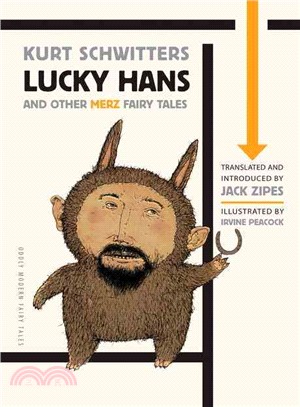 Kurt Schwitters revolutionized the art world in the 1920s with his Dadaist Merz collages, theater performances, and poetry. But at the same time he was also writing extraordinary fairy tales that were turning the genre upside down and inside out. Lucky Hans and Other Merz Fairy Tales is the first collection of these subversive, little-known stories in any language and the first time all but a few of them have appeared in English. Translated and introduced by Jack Zipes, one of the world's leading authorities on fairy tales, this book gathers thirty-two stories written between 1925 and Schwitters's death in 1948--including a complete English-language recreation of The Scarecrow, a children's book illustrated with avant-garde typography that Schwitters created with Kate Steinitz and De Stijl founder Theo van Doesburg. Lucky Hans and Other Merz Fairy Tales also includes brilliant new illustrations that evoke the 1920s, 1930s, and 1940s.

Schwitters wrote these darkly humorous, satirical, and surreal tales at a time when traditional German fairy tales were being co-opted by the Nazis. Filled with sharp critiques of German life during the Weimar and early Nazi eras, Schwitters's tales are rich with absurdist events and insist that not everyone--and perhaps not anyone--lives happily ever after. In "Lucky Hans," the starving protagonist tries to catch a rabbit only to have it shed its fur like a coat and run off naked into the forest. In other tales, a sarcastic gypsy stands in for a fairy godmother and an army recruit is arrested for growing to monstrous size.

Lucky Hans and Other Merz Fairy Tales is a delightfully strange and surprising book.

Jack Zipes is a leading authority on fairy tales. His translations include "The Complete Fairy Tales of the Brothers Grimm" and "The Fairy Tales of Hermann Hesse" (both Bantam). He is the editor of "The Great Fairy Tale Tradition" (Norton), and the author of "Why Fairy Tales Stick" and "Hans Christian Andersen", among many other books. He is professor emeritus of German and comparative literature at the University of Minnesota.
PrevNext