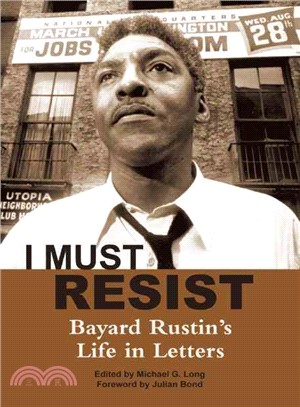 Published on the centennial of his birth, and in anticipation of the 50th anniversary of the historic March on Washington, here is Bayard Rustin’s life story told in his own words.

Bayard Rustin has been called the ?lost prophet” of the civil rights movement. A master strategist and tireless activist, he is best remembered as the organizer of the 1963 March on Washington, one of the largest nonviolent protests ever held in the U.S. He brought Gandhi’s protest techniques to the American civil rights movement and played a deeply influential role in the life of Martin Luther King, Jr., helping to mold him into an international symbol of nonviolence.

Despite these achievements, Rustin often remained in the background. He was silenced, threatened, arrested, beaten, imprisoned and fired from important leadership positions, largely because he was an openly gay man in a fiercely homophobic era.

Here we have Rustin in his own words in a collection of over 150 of his letters; his correspondents include the major progressives of his day ? for example, Eleanor Holmes Norton, A. Philip Randolph, Roy Wilkins, Ella Baker, and of course, Martin Luther King, Jr.

Bayard Rustin’s eloquent, impassioned voice, his ability to chart the path ?from protest to politics,” is both timely and deeply informative. As the Occupy movement ushers America into a pivotal election year, and as politicians and citizens re-assess their goals and strategies, these letters provide direct access to the strategic thinking and tactical planning that led to the successes of one of America’s most transformative and historic social movements.
Michael G. Long is an associate professor of religious studies and peace and conflict studies at Elizabethtown College and is the author or editor of several books on civil rights, religion, and politics in mid-century America, including Marshalling Justice: The Early Civil Rights Letters of Thurgood Marshall and First Class Citizenship: The Civil Rights Letters of Jackie Robinson. He holds a Ph.D. from Emory University in Atlanta and resides in Highland Park, Pennsylvania.

Long’s books have been featured or reviewed in The New York Times, The Los Angeles Times, The Boston Globe, USA Today, Book Forum, Ebony/Jet, and many other newspapers and journals. He has appeared on C-Span and NPR, and his speaking engagements have taken him from the National Archives in Washington, D.C., to the Houston Public Library in Texas, to the City Club of San Diego.
PrevNext