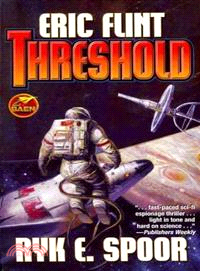 When the strange fossil she'd discovered gave her a trip to Mars, Helen Sutter thought she'd gone about as far as any paleontologist would ever go in her lifetime. But when you’re married to an overconfident super-sensor expert for the only private agency in space – the Ares Corporation – and your best friend is a former secret agent for the Interplanetary Research Institute of the United Nations, there's always somewhere farther to go.?

Soon Helen’s new discoveries will lead her ?to the mysterious asteroid Ceres and beyond in a desperate race to reach Jupiter's perilous miniature system of radiation-bombarded moons. It seems the next gold rush is on–for alien technology.???

And there are people willing to do anything to get it – even if they must start the Solar System’s first interplanetary war!

About the Boundary series:

“[A] genial, fast-paced sci-fi espionage thriller [that is] light in tone and hard on science…” –Publishers Weekly on Threshold

“[P]aleontology, engineering, and space flight, puzzles in linguistics, biology, physics, and evolution further the story, as well as wacky humor, academic rivalries, and even some sweet romances.” –School Library Journal on Boundary

Eric Flint is a modern master of alternate history, with over three million books in print. He’s the author/creator of the New York Times best-selling Ring of Fire series. With David Drake he has written six popular novels in the “Belisarius” alternate Roman history series, including, and with David Weber collaborated on 1633 and 1634: The Baltic War. Flint was for many years a labor union activist. He lives in Chicago, Illinois. Ryk E. Spoor, while earning his masters degree in Pittsburgh, became a playtesting consultant and writer for the Wizards of the Coast, the leading publisher of role-playing games and related novels. He now lives in East Greenbush, NY, working as a technical proposal writer for a high-tech R&D firm, and spending his non-writing time with his wife and sons. Baen published his first novel, Digital Knight, in 2003.
PrevNext