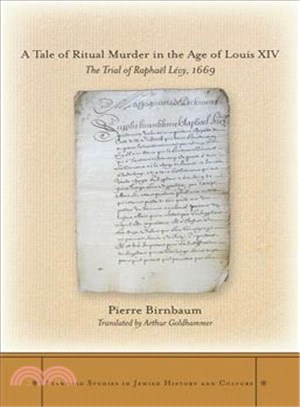 In the late seventeenth century, France prided itself for its rationality and scientific achievements. Yet it was then that Raphael Levy, a French Jew, was convicted, tortured, and executed for an act he did not commit, a fiction deriving from medieval anti-Jewish myth: the ritual murder of a Christian boy to obtain blood for satanic rituals. When Levy was accused of the ritual murder, it was the first accusation of blood libel for a century. Levy's trial, however, became a forum for anti-Jewish accusations, and although the Holy Roman Emperor and a representative of King Louis XIV both tried to intervene, they were ignored by the parliament of Metz.

Pierre Birnbaum explores the cultural, political, and personal elements that led to the accusation and shows that the importance of this story goes beyond local history: at a critical moment in the construction of the nation-state, France was unable to impose its conception of law and order on local officials. Birnbaum reveals the echoes of Levy's trial in the Dreyfus Affair and suggests that, amid the contemporary retreat of the state and the accompanying explosion of prejudice and violence, it is time to remember the tragic fate of Raphael Levy.
Pierre Birnbaum is a leading French historian and sociologist and Professor Emeritus of Political Science at the University of Paris I—Pantheon-Sorbonne. His works available in English include The Jews of the Republic (Stanford, 1996) and Geography of Hope (Stanford, 2008).
PrevNext