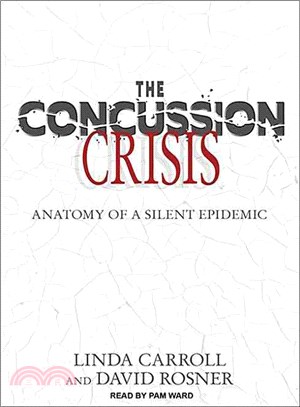 For far too long, the menace of concussions has been hidden in plain sight. On playing fields across America, lives are being derailed by seemingly innocuous jolts to the head. From the peewees to the pros, concussions are reaching epidemic proportions. This book brings that hidden epidemic and its consequences out of the shadows.As frightening as the numbers are-estimates of sports-related concussions range from 1.6 million to 3.8 million annually in the United States-they can't begin to explain the profound impact of a hidden health problem that can strike any of us. It is becoming increasingly clear that concussions, like severe head traumas, can rob us of our memory, our mental abilities, our very sense of self. Because the damage caused by a concussion is rarely visible to the naked eye or even on a brain scan, no one knows how many millions might be living lives devastated by an invisible injury too often shrugged off as "just a bump on the head."This book puts a human face on a huge public health crisis. Through narratives that chronicle the poignant experiences of real people struggling with this invisible and often unrecognized brain injury, Linda Carroll and David Rosner bring home its potentially devastating consequences. Among those you will meet are a high school football player whose college dreams were derailed by a series of undiagnosed concussions, a hard-driving soccer star whose own struggles with concussions pushed her to crusade for safety reform as a coach and soccer mom, and an economist who lost her career because of lingering concussion symptoms from a fender bender.The Concussion Crisis weaves these human dramas with compelling stories of scientists and doctors who are unraveling the mysteries of how an invisible injury can wreak such havoc. It takes listeners into the top labs, where scientists are teasing out what goes wrong in the brain after a jolt to the head, and into the nation's leading concussion clinic, where patients get cutting-edge management and treatment. Carroll and Rosner analyze the cultural factors that allowed this burgeoning epidemic to fester unseen and untreated. They chronicle the growing public awareness sparked by the premature retirements of superstars like NFL quarterbacks Troy Aikman and Steve Young. And they argue for an immediate change in a macho culture that minimizes the dangers inherent in repeated jolts to the head.The Concussion Crisis sounds an urgent wake-up call to parents, coaches, trainers, doctors, and the athletes themselves. The book will stand as the definitive exploration of this heretofore-silent health crisis. It should be required listening for every parent with a child playing sports-in fact, by everyone who has ever suffered a hard bump on the head.
Linda Carroll has been a nationally respected health writer for seventeen years. While covering a broad range of health topics for MSNBC.com and the New York Times, she has developed specialized expertise in brain science. As an MSNBC.com contract writer for the past ten years, she has done everything from investigative reporting to column writing, and was the MSNBC.com women's health columnist for five years. She has also written investigative pieces for Health and SmartMoney, and in-depth health and medical articles for Newsday and the Los Angeles Times. David Rosner is a journalist with extensive experience covering sports and health for prominent publications. As a longtime sports writer at Newsday in New York, he won national newspaper awards for deadline, enterprise, and investigative reporting and broke ground in the coverage of athletes with disabilities for WeMedia's award-winning website. In addition to freelancing articles for national magazines ranging from Time to the Sporting News, he coauthored The Official Illustrated NHL History. David has also edited two national consumer magazines, including Neurology Now, the official patients' magazine of the American Academy of Neurology. Pam Ward has had many incarnations, including private detective, classical musician, television talk-show host, and actress, having performed in dinner theater, summer stock, and Off-Broadway, as well as in commercials, radio, and film. But she found her true calling reading books for the blind and physically handicapped for the Library of Congress Talking Books program, for which she received the prestigious Alexander Scourby Award from the American Foundation for the Blind. An AudioFile Earphones Award winner, her many audiobooks include Dancing in the Streets by Barbara Ehrenreich, Breaking Free by Lauraine Snelling, The Second Journey by Joan Anderson, and Lion in the White House by Aida D. Donald. She now records from her studio amidst the beauty of the Southern Oregon mountains.
PrevNext