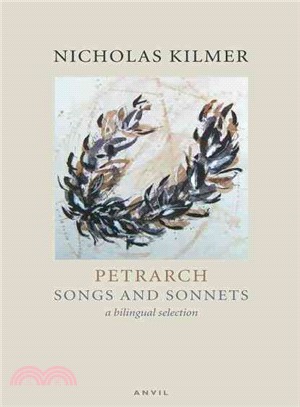 I saw the tracks of angels in the earth,
The beauty of heaven walking by itself on the world.

The great fourteenth-century poet's lyric and love poems are presented as living poetry in Nicholas Kilmer's powerful and moving versions. His selection convinces us that, as he puts it, "Petrarch deserves to be valued as a real man, a careful thinker, a good poet." Free in form yet holding close to the central impulses of Petrarch's inspiration, Kilmer's "readings" in this bilingual edition present Petrarch as a confessional poet, but one who is a humane moralist of startling honesty.

Nicholas Kilmer, former dean of the Swain College of Art and Design in New Bedford, Massachussetts, has made his living as an art dealer and curator since leaving teaching in 1982. He also writes mysteries set in the art world.

Francesco Petrarch: Francesco Petrarca (1304?1374), known in English as Petrarch, was born in Arezzo. A scholar, poet and an early Renaissance humanist, he spent much of his early life at Avignon, where his family had moved. He studied law in France and Italy at his father’s behest. He wrote poetry both in Latin and Italian; his sonnets became hugely influential throughout Europe. In 1341 he was crowned poet laureate in Rome ? the first since antiquity. He collected manuscripts during his travels in Europe as an ambassador, and was a major figure in the recovery of the classical heritage of Greece and Rome. He had two children and lived with his daughter and her family in Venice from 1362 to 1367 and then in Arqua near Padua where he died.
Nicholas Kilmer: Nicholas Kilmer is a former Dean of the Swain School of Design in New Bedford, MA. Since leaving teaching in 1982, he has made his living as an art dealer and curator. He is editor of the Frederick Carl Frieseke Catalogue Raisonne and the biographer of record for the American painter Thomas Buford Meteyard (1865?1928). His Poems of Pierre de Ronsard was published in 1979 and Dante’s Comedy: The Inferno in 1985. He also writes mysteries set in the art world; the eighth in this series appears in 2011. Kilmer lives with his wife, Julia, in Cambridge, MA, and Normandy, France.