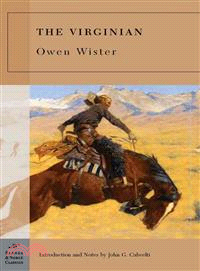 The Virginian, by Owen Wister, is part of the Barnes & Noble Classics series, which offers quality editions at affordable prices to the student and the general reader, including new scholarship, thoughtful design, and pages of carefully crafted extras. Here are some of the remarkable features of Barnes & Noble Classics:
All editions are beautifully designed and are printed to superior specifications; some include illustrations of historical interest. Barnes & Noble Classics pulls together a constellation of influences?biographical, historical, and literary?to enrich each reader's understanding of these enduring works.

The western is one of America’s most important and influential contributions to world culture. And it was Owen Wister’s The Virginian, first published in 1902, that created the familiar archetypes of character, setting, and action that still dominate western fiction and film.

The Virginian's characters include: The hero, tall, taciturn, and unflappable, confident in his skills, careful of his honor, mysterious in his background; the heroine, the ?schoolmarm from the East,” dedicated to civilizing the untamed town, but willing to adapt to its ways?up to a point; and the villain, who is a liar, a thief, a killer, and worst of all, a coward beneath his bluster. Its setting?the lonely small town in the midst of the vast, empty, dangerous but overwhelmingly beautiful landscape?plays so crucial a role that it may be regarded as one of the primary characters. And its action?the cattle roundup, the capture of the rustlers, the agonizing moral choices demanded by ?western justice,” and the climactic shoot-out between hero and villain?shaped the plots of the thousands of books and movies that followed.