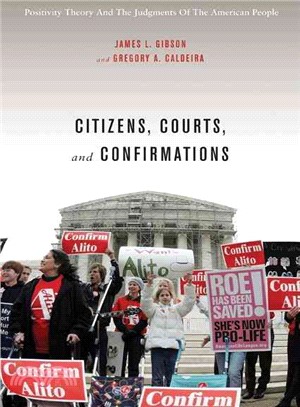 In recent years the American public has witnessed several hard-fought battles over nominees to the U.S. Supreme Court. In these heated confirmation fights, candidates' legal and political philosophies have been subject to intense scrutiny and debate. Citizens, Courts, and Confirmations examines one such fight--over the nomination of Samuel Alito--to discover how and why people formed opinions about the nominee, and to determine how the confirmation process shaped perceptions of the Supreme Court's legitimacy.

Drawing on a nationally representative survey, James Gibson and Gregory Caldeira use the Alito confirmation fight as a window into public attitudes about the nation's highest court. They find that Americans know far more about the Supreme Court than many realize, that the Court enjoys a great deal of legitimacy among the American people, that attitudes toward the Court as an institution generally do not suffer from partisan or ideological polarization, and that public knowledge enhances the legitimacy accorded the Court. Yet the authors demonstrate that partisan and ideological infighting that treats the Court as just another political institution undermines the considerable public support the institution currently enjoys, and that politicized confirmation battles pose a grave threat to the basic legitimacy of the Supreme Court.

James L. Gibson is the Sidney W. Souers Professor of Government at Washington University in St. Louis. His books include "Overcoming Apartheid: Can Truth Reconcile a Divided Nation?" Gregory A. Caldeira holds the Ann and Darrell Dreher Chair in Political Communication and Policy Thinking at Ohio State University.
PrevNext