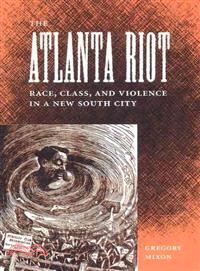 Gregory Mixon traces the roots of the Atlanta Riot of 1906, exploring the intricate political, social, and urban conditions that led to one of the defining events of race relations in southern and African-American history. On September 22, 1906, several thousand white Atlantans rioted, ostensibly because they believed that black men had committed "repeated assaults on the white women of Fulton County," according to newspapers at the time. Four days after the massacre began, 32 people had died and 70 were wounded.
Mixon acknowledges the traditional interpretation of factors that precipitated the riot--postbellum race relations and the codification of Jim Crow, an inflammatory press, and the race-baiting tactics of the gubernatorial candidates Hoke Smith and Clark Howell. But he argues that a complex coalition of Atlanta's white commercial and civic leaders also contributed to political divisions within Georgia's Democratic Party and to the riot as well. As Atlanta's elite crafted new forms of segregation and modes of disempowering blacks (and also working-class whites), Mixon says, their machinations led directly to the tragedy.
At the turn of the 20th century, urbanization and industrialization were changing Atlanta's racial boundaries, and black Atlantans aspired to be city builders both in their neighborhoods and in greater Atlanta. They competed with whites for jobs and public space. The growing autonomy and political influence of blacks threatened white supremacy, Mixon says, and the violence of 1906 was an attempt by Atlanta's elites to reaffirm their dominance.
?Mixon also documents the activism of the city's black elite, especially professors and administrators at Atlanta University, including W.E.B. Du Bois and John Hope, and ministers, most notably Rev. Henry Hugh Proctor. While they defended all blacks against notions of racial inferiority and worked to improve the lives of the poor and uneducated of both races, they nonetheless criticized members of the black working class for "irregular" work habits and "destructive" use of their leisure hours.
Looking at both white and black issues in the growth of Atlanta, this book establishes a context for racial violence in the city, the state, and the region. It also raises broader questions of conflicting agendas among whites and blacks that defined labor, politics, and urban space in the New South.
?
?
Gregory Mixon, assistant professor of history at the University of North Carolina, Charlotte, is the author of articles published in Georgia Historical Quarterly, Journal of Negro History, and Atlanta History: A Journal of Georgia and the South.
?
PrevNext