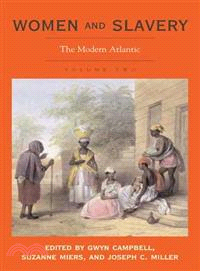 The literature on women enslaved around the world has grown rapidly in the last ten years, evidencing strong interest in the subject across a range of academic disciplines. Until Women and Slavery, no single collection has focused on female slaves who—as these two volumes reveal—probably constituted the considerable majority of those enslaved in Africa, Asia, and Europe over several millennia and who accounted for a greater proportion of the enslaved in the Americas than is customarily acknowledged.

Women enslaved in the Americas came to bear highly gendered reputations among whites—as “scheming Jezebels,” ample and devoted “mammies,” or suffering victims of white male brutality and sexual abuse—that revealed more about the psychology of enslaving than about the courage and creativity of the women enslaved. These strong images of modern New World slavery contrast with the equally expressive virtual invisibility of the women enslaved in the Old—concealed in harems, represented to meddling colonial rulers as “wives” and “nieces,” taken into African families and kin-groups in subtlely nuanced fashion.

Volume 2 Contributors: Henrice Altin,k Laurence Brown, Myriam Cottias, Laura F. Edwards, Richard Follett, Tara Inniss, Barbara Krauthamer, Joseph C. Miller, Bernard Moitt, Kenneth Morgan, Claire Robertson, Marsha Robinson, Felipe Smith, and Mariza de Carvalho Soares.
Gwyn Campbell, Canada Research Chair in Indian Ocean World History at McGill University, is the author and editor of many works, including Abolition and Its Aftermath in Indian Ocean Africa and Asia and An Economic History of Imperial Madagascar. Suzanne Miers is professor emerita of history at Ohio University. She is the author of Slavery in the Twentieth Century and coeditor of The End of Slavery and other books. Joseph C. Miller is the T. Cary Johnson, Jr. Professor of history at the University of Virginia. He is the author of Kings and Kinsmen, Way of Death, and works on the world history of slavery.
PrevNext