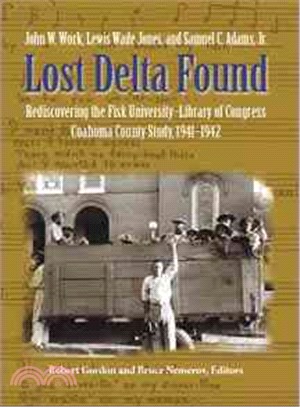 This remarkable book recovers three invaluable perspectives, long thought to have been lost, on the culture and music of the Mississippi Delta.

In 1941 and '42 African American scholars from Fisk University--among them the noted composer and musicologist John W. Work, sociologist Lewis Wade Jones, and graduate student Samuel C. Adams, Jr.--joined folklorist Alan Lomax of the Library of Congress on research trips to Coahoma County, Mississippi. Their mission was to explore the musical habits and history of the black community there and "to document adequately the cultural and social backgrounds for music in the community." Among the fruits of the project were the earliest recordings by the legendary blues singer and guitarist Muddy Waters. The hallmark of the study was to have been a joint publication of its findings by Fisk and the Library of Congress. However, the field notes and manuscripts by the Fisk researchers became lost in Washington. Lomax's own book drawing on the project's findings, The Land Where the Blues Began, did not appear until 1993, and although it won a National Book Critics Circle Award, it was flawed by a number of historical inaccuracies.

Recently uncovered by author and filmmaker Robert Gordon, the writings, interviews, notes, and musical transcriptions produced by Work, Jones, and Adams in the Coahoma County study now appear in print for the first time. Their work captures, with compelling immediacy, a place, a people, a way of life, and a set of rich musical traditions as they existed sixty years ago. Until the surfacing of these documents, Lomax's perspective was all that was known of the Coahoma County project and its research. Now, at last, the voices of the other contributors can be heard.

Including essays by Bruce Nemerov and Gordon on the careers and contributions of Work, Jones, and Adams, Lost Delta Found will become an indispensable historical resource, as marvelously readable as it is enlightening.

Illustrated with photos and more than 160 musical transcriptions.