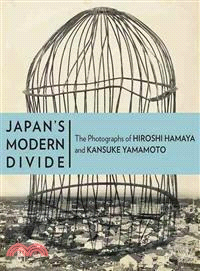 In the 1930s the history of Japanese photography evolved in two very different directions: one toward documentary photography, the other favoring an experimental, or avant-garde, approach strongly influenced by Western Surrealism. This book explores these two strains of modern Japanese photography through the work of two remarkable figures: Hiroshi Hamaya and Kansuke Yamamoto.

Hiroshi Hamaya (1915–1999) was born and raised in Tokyo and, after an initial period of creative experimentation, turned his attention to recording traditional life and culture on the coast of the Sea of Japan. In 1940 he began photographing the New Year’s rituals in a remote village, which was published as Yukiguni (Snow country). He went on to record cultural changes in China, political protests in Japan, and landscapes around the world.

Kansuke Yamamoto (1914–1987) became fascinated by the innovative approaches in art and literature exemplified by such Western artists as Man Ray, Rene Magritte, and Yves Tanguy. He promoted Surrealist and avant-garde ideas in Japan through his poetry, paintings, sculptures, and photographs.