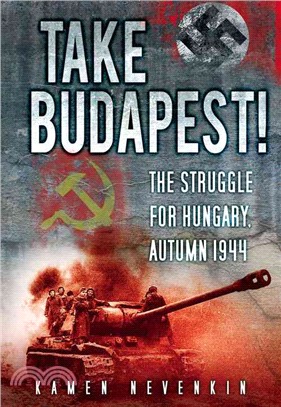 Describes the failed attempt of the Red Army to capture Budapest and Vienna in late 1944, in order to forestall the Western Allies in Central Europe—with previously unpublished photographs

October 1944: Soviet troops launched a powerful attack on Budapest from the south, the culmination of a series of military, political, diplomatic, and underground moves undertaken by Hitler, Stalin, and Churchill since the collapse of the Axis front in the Balkans two months earlier. However, what had been planned as a bold stroke to knock Hungary out of the war and bring the Red Army as far as Munich quickly became a stalemate. The end result was that Stalin's forces failed to reach Bavaria, but the dictator was not disappointed: Soviet pressure against the German southern flank forced Hitler to transfer a considerable number of his armored reserves to Hungary, and thus largely facilitated Zhukov's drive on to Berlin. Here, Kamen Nevenkin tells the fascinating story of this "Market Garden"-like operation using a number of never before published German and Russian archival documents, including German papers exclusively held in the Russian military archive. Along with a detailed tactical narrative, this book also uses first-person accounts to render a human tale of war, creating an ultimately fascinating read.

Kamen Nevenkin is the author of Into the Enemy's Den.
PrevNext