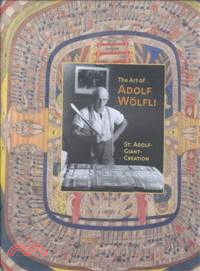 Despite being institutionalized for schizophrenia at age thirty-one, Adolf Wolfli (1864-1930) achieved artistic greatness in his cell at Waldau Mental Asylum near his native Bern, Switzerland. He has had a profound influence on modern art ever since; Andre Breton described his work as "one of the three or four most important oeuvres of the twentieth century." The Art of Adolf Wolfli offers a fresh vantage point on the artist's remarkably intricate drawings and astonishing collages, as well as his newly translated writings, which are justly celebrated for their dizzying blend of mythology and humor. Also included are illuminating essays by leading specialists on his art and life.

Wolfli's youth was one of deprivation. His alcoholic father ran off when Wolfli was five, and his mother died soon after. Despite these travails, he managed to complete his education, acquiring the sophisticated literacy so evident in his later work. However, beginning at age twenty-six, his repeated attempts to molest young girls landed him first in jail and, in 1894, in the asylum. Though violent at first, by 1899 he calmed down--and began to draw.

Sure to be the authoritative resource for this remarkable oeuvre, this striking book represents compelling testimony that great torment does not preclude great art.

Elka Spoerri (1924-2002), founding curator of the Adolf Wolfli Foundation at the Museum of Fine Arts, Bern, wrote many publications on Wolfli's art and was the editor of his literary oeuvre. Daniel Baumann, an art historian, has served as curator of the Adolf Wolfli Foundation since 1996. Edward M. Gomez writes about the visual arts for the New York Times and numerous other publications, and is also a graphic designer. Gerard C. Wertkin is Director of the American Folk Art Museum and an adjunct associate professor of art and art education at New York University.
PrevNext