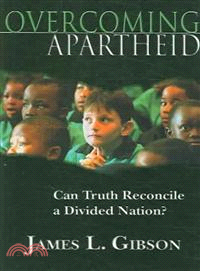 Perhaps no country in history has so directly and thoroughly confronted its past in an effort to shape its future as has South Africa. Working from the belief that understanding the past will help build a more peaceful and democratic future, South Africa has made a concerted, institutionalized effort to come to grips with its history of apartheid through its Truth and Reconciliation Commission. InOvercoming Apartheid, James L. Gibson provides the first systematic assessment of whether South Africa's truth and reconciliation process has been successful. Has the process allowed South Africa to let go of its painful past and move on? Or has it exacerbated racial tensions by revisiting painful human rights violations and granting amnesty to their perpetrators?

Overcoming Apartheid reports on the largest and most comprehensive study of post-apartheid attitudes in South Africa to date, involving a representative sample of all major racial, ethnic, and linguistic groups. Grounding his analysis of truth in theories of collective memory, Gibson discovers that the process has been most successful in creating a common understanding of the nature of apartheid. His analysis then demonstrates how this common understanding is helping to foster reconciliation, as defined by the acceptance of basic principles of human rights and political tolerance, rejection of racial prejudice, and acceptance of the institutions of a new political order. Gibson identifies key elements in the process—such as acknowledging shared responsibility for atrocities of the past—that are essential if reconciliation is to move forward. He concludes that without the truth and reconciliation process, the prospects for a reconciled, democratic South Africa would diminish considerably. Gibson also speculates about whether the South African experience provides any lessons for other countries around the globe trying to overcome their repressive pasts.

A groundbreaking work of social science research, Overcoming Apartheid is also a primer for utilizing innovative conceptual and methodological tools in analyzing truth processes throughout the world. It is sure to be a valuable resource for political scientists, social scientists, group relations theorists, and students of transitional justice and human rights.