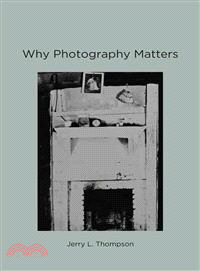 Photography matters, writes Jerry Thompson, because of how it works -- not only as anartistic medium but also as a way of knowing. It matters because how we understand what photographyis and how it works tell us something about how we understand anything. With these provocativeobservations, Thompson begins a wide-ranging and lucid meditation on why photography is unique amongthe picture-making arts.

Thompson, a working photographer for forty years,constructs an argument that moves with natural logic from Thomas Pynchon (and why we read him forhis vision and not his command of miscellaneous facts) to Jonathan Swift to Plato to Emily Dickinson(who wrote "Tell all the Truth but tell it slant") to detailed readings of photographs byEugene Atget, Garry Winogrand, Marcia Due, Walker Evans, and Robert Frank. He questions SusanSontag's assertion in On Photography that "nobody" can any longerimagine literate, authoritative, or transcendent photographs. He considers the money-fueledexpansion of the market for photography, and he compares ambitious "meant-for-the-wall"photographs with smaller, quieter works. Forcefully and persuasively, Thompson argues forphotography as a medium concerned with understanding the world we live in -- a medium whose businessis not constructing fantasies pleasing to the eye or imagination but describing the world in thetoughest and deepest way.