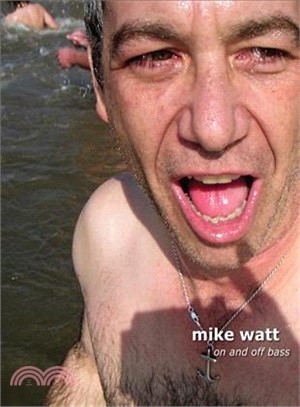 The New Yorker calls it ?unusual and beautiful.” The LA Weekly raves, ?the photos are strikingly inventive, revealing yet another side of this modern-day Renaissance man.” MTV calls it ?a charming, well-shot document of a the legendary punk rocker’s photographic dabbling.” Detroit Metrotimes: ?A unique insight into Watt’s mind.”

?Mike Watt: On and Off Bass” is getting a lot of buzz. And for good reason, considering the author and photographer is the legendary punk bassist himself.

Off the road, at his beloved San Pedro, CA home base, Watt developed a deep interest in photography. In Spring 2010, Track 16 Gallery in Santa Monica, CA hosted an exhibit of his photos: ?Mike Watt: Eye-Gifts from Pedro.” According to Track 16 executive director Laurie Steelink, who curated the exhibit, ?He has this knack for finding the early morning sweet spots when venturing out alone on his bike or kayak. The resulting photographs never seem to dry: light, flight, salt, rust, and tide commingle in fiery sunrises, endless heavens, roiling waves and fog.” The photos offer another side of Watt that fans of his punk rock music may not be familiar with: While seemingly serene, many have an underlying tension and that often shows the sharp contrast between industry and nature.

In ?Mike Watt: On and Off Bass,” photographs that appeared in the exhibit are punctuated by Watt’s poetry and snippets selected from 10 years of his diaries. Watt’s writing is insightful, funny, intimate and honest, as he explores topics like John Coltrane, long hauls and overcoming performance fears. ?Mike Watt: On and Off Bass” exposes Watt’s vision as a photographer, diarist and poet, taking its readers on a trip. And when you stop turning the pages of Watt’s story, you start turning the pages of yours, re-ignited.

? Mike Watt’s photos are the poetry of San Pedro...every time he goes out on that kayak he comes back with gold. These gorgeous images paired with the raw reflections of three decades on the road are sure to blow the minds of all who love punk rock and our beloved vision questing troubadour.” - Jack Black

? Here is the last stand of the fruited earth and the ship-freighted sea. How lovely America was. God bless San Pedro and Mike Watt.” - Iggy Pop

" The heart and mind and EYES of Michael Watt, half-brother of us all, in black/white and color. No blue-eyed beatnik Buddhist ever breathed such humility; no jackleg science-fictioneer ever oozed such enchantment. That's right!" - Richard Meltzer

" Susan Sontag wrote that photographs of people are haunted by death. There aren't many people in Mike Watt's photographs so maybe that's why they seem haunted rather by life ? the large operations of man around the harbor and the smaller scale activity of wildlife that puts up with them. Mike is out at sun-up and getting to see SoCal's lands end from his kayak is an unearned privilege, the best kind a book can deliver. Paired with excerpts from his journal which catch him rolling across the continents as a working musician gives a -precise idea what besides exercise Mike gets out of it." - Joe Carducci

" Mike Watt is poetry. He's like one half of a metaphor. Watt can only be matched in poetry. When you mix pirate, Pedro pix, music, d. boon forever, hard work, weird sincerity, good will, curiosity, love, and an adult moustache, what do you have? Poetry is the answer. -Poetry poetry poetry. Watt Watt Watt!" - Richard Hell