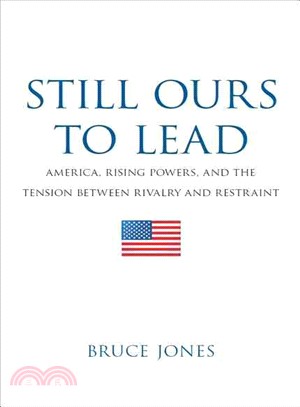 America is debating its role in the world. Critics contend that we are leading from behind in places such as Libya, and not at all in places such as Syria. There are pervasive fears about our lost influence in the international economy and of the threat posed by a rising China. The debate has been shaped by concepts of American decline and Western disunity and the rise of a powerful bloc of emerging powers. The result, it is argued, is that we live in a "post-Western" world, a leaderless world, where conflict and disorder will outpace cooperation and problem solving. In this provocative Brookings FOCUS book, Bruce Jones explains why these are myths or, at the very least, exaggerations.

The United States is still by far the most influential actor in international politics and security, and it does not face a changing world alone ?America has myriad allies, including many of the world's top economic and security powers. Together, the United States and its partners still hold the preponderance of power in international politics and economics and will for some time to come. What's more, the rising powers are deeply divided among themselves ?in actuality, there is very little mortar among the emergent BRICS (Brazil, Russia, India, China, and South Africa). And some of the emerging powers are actively seeking to strengthen, not weaken, the international order ?though of course, they want a greater seat at the table as they do so. Nor is it just these five that are rising: among the ranks of nations whose influence in international politics is increasing are countries such as South Korea and Germany, close U.S. allies both. And while China is clearly going to challenge some aspects of American leadership, there are other places where the United States and China share interests.

This account ?which draws on years of insider access to top decisionmakers both in Washington and in the capitals of the rising powers ?shows there is more appetite for cooperation than meets the eye. There are risks ahead, to be sure; but in the race between the American-led order and the "coming disorder," it's still ours to lose.

Bruce Jones is a senior fellow and director of the Managing Global Order project under the Foreign Policy at Brookings, where he writes on international order, the rising powers, international institutions, and intervention. He has experience in Middle East peace negotiations, crisis management in the Balkans, in the UN, and in intergovernmental negotiations on security and transnational threats.