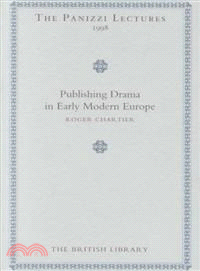 This book, by one of the most distinguished of contemporary cultural historians, examines the relationship between plays in performance and plays in print and the often tortuous transmission of texts from the theatre to the printing-house (and back again) in the sixteenth and seventeenth centuries.
In exploring this theme Dr Chartier touches on a wide variety of examples and topics drawn from the golden age of European drama, including the work of Shakespeare and the Jacobean theatre, Lope de Vega, and Moli|re: punctuation as a form of orality in written texts, memorial reconstruction of theatrical performances, authorship, ownership and piracy of printed plays, the functions of plays for audiences and for readers, the significance of performance history, manuscript marginalia as evidence for the cultural contexts of reception and interpretation. The result is a fascinating and thought-provoking study of the endlessly generative cultural instability of all texts and their material forms.
PrevNext