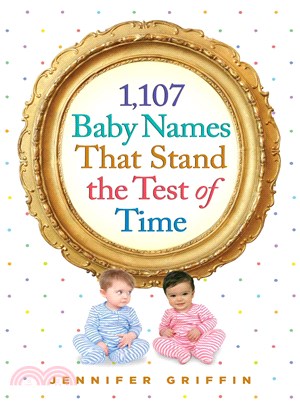 There are tens of thousands of baby names out there—and books that dutifully list them. And then there is 1,107 Baby Names That Stand the Test of Time—a curated, considered, opinionated, and richly informative guide that winnows down the world of baby names to help moms and dads make smart choices, sidestep the trendiness trap, and avoid the ranks of parents (more than 54%) who later regret the name they chose.

This is the book for parents who know they are naming not only a cuddly newborn but an actual human being who will be proud to carry this name throughout his or her entire life—a name like Eloise, the French version of Louise, which means “fighter,” perfect for a feisty girl; Brendan, a solid Celtic name meaning “prince”; or Beatrice, an old-fashioned beauty with roots in both Dante and Shakespeare. 1,107 Baby Names makes a strong case for each name selected and features the name’s definition, its use in history, its connotations and subtleties, and its “meaning” in the fuller, cultural sense of the word. Included are variations, nicknames (with suggestions for working backward from a nickname to something with more gravitas), and, especially useful, alternatives—names that have the same flavor but may be less common or sound better with a particular last name or family background. There’s a guide to the basic rules of baby-naming: scansion—the sounds, syllables, and rhythm of a name, and how it goes with a last name; ethnic traditions; recent trends; and effective use of a middle name.

1,107 Baby Names was formerly published under the title Bring Back Beatrice! and is now offered with a clearer, more direct title. But the distinctive promise is the same: This is the book you need to find a name that reflects your values and will bring joy to your child.