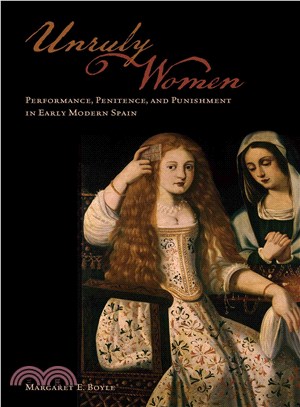 In the first in-depth study of the interconnected relationships among public theatre, custodial institutions, and women in early modern Spain, Margaret E. Boyle explores the contradictory practices of rehabilitation enacted by women both on and off stage. Pairing historical narratives and archival records with canonical and non-canonical theatrical representations of women’s deviance and rehabilitation, Unruly Women argues that women’s performances of penitence and punishment should be considered a significant factor in early modern Spanish life.

Boyle considers both real-life sites of rehabilitation for women in seventeenth-century Madrid, including a jail and a magdalen house, and women onstage, where she identifies three distinct representations of female deviance: the widow, the vixen, and the murderess. Unruly Women explores these archetypal figures in order to demonstrate the ways a variety of playwrights comment on women’s non-normative relationships to the topics of marriage, sex, and violence.