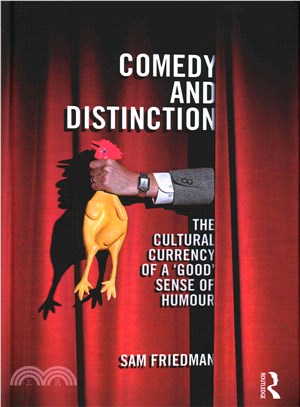 Comedy is currently enjoying unprecedented growth within the British culture industries. Defying the recent economic downturn, it has exploded into a booming billion-pound industry both on TV and on the live circuit. Despite this, academia has either ignored comedy or focused solely on analysing comedians or comic texts. This scholarship tends to assume that through analysing an artist’s intentions or techniques, we can somehow understand what is and what isn’t funny. But this poses a fundamental question – funny to whom? How can we definitively discern how audiences react to comedy?

shifts the focus to provide the first ever empirical examination of British comedy taste. Drawing on a large-scale survey and in-depth interviews carried out at the Edinburgh Festival Fringe, the book explores what types of comedy people like (and dislike), what their preferences reveal about their sense of humour, how comedy taste lubricates everyday interaction, and how issues of social class, gender, ethnicity and geographical location interact with patterns of comic taste. Friedman asks:

This book will be of interest to students and scholars of sociology, social class, social theory, cultural studies and comedy studies.

Sam Friedman is a lecturer in sociology at City University. He has published articles on comedy taste, comedy TV scouts, elites and social mobility. He is also the publisher of Fest magazine, the largest magazine covering the Edinburgh Festival Fringe.