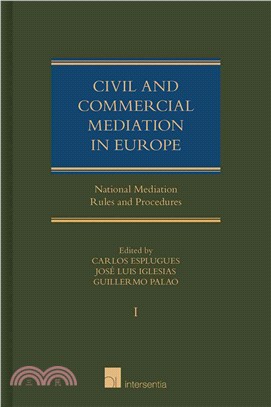 Originally available as two separate volumes, Intersentia's Civil and Commercial Mediation in Europe is now available as a two volume set. *** About Volume I on National Mediation Rules and Procedures: Mediation is becoming an increasingly important tool for resolving civil and commercial disputes. Although it has been long since recognized in many legal systems, in recent years it has received an important boost and is currently one of the most topical issues in the field of dispute resolution. The European Directive 2008/52/EC of the European Parliament and of the Council of 21.5.2008 on certain aspects of mediation in civil and commercial matters, prescribes a set of minimum common rules on mediation for all EU Member States, with the exception of Denmark. This book examines the current legal framework in every EU Member State regarding mediation in civil and commercial matters, as well as the way in which the Directive has been, or is expected to be, implemented in the near future. It is written by renowned specialists on mediation in Europe and provides an exhaustive account for both scholars and practitioners in Europe and beyond the continent. Every chapter on national law analyzes: both out-of-court and court-annexed mediation in the existing legal framework * the areas of law covered by mediation * the value and formal requirements of the agreement to submit any dispute to mediation * personal features and requirements for mediators * procedural requirements in the mediation procedure * the relationship between the mediator and public authorities * the outcome of the mediation procedure * in the scenario in which a mediation settlement is reached, its requirements and effects. *** About Volume II on Cross-Border Mediation: Mediation plays a leading role within the movement of Alternative Dispute Resolution after centuries in which for several reasons the State and State courts were regarded as the only available instrument to ensure access to justice to citizens. In the European Union the institution of mediation has received much support in the form of Directive 2008/52/EC which sets forth a minimum common legal framework for mediation in the Member States. The 2008 Directive has finally been implemented in the Member States and this book provides the much needed in-depth analysis of the status of the mediation regimes in the European Union. The analysis covers the legal regimes of the Member States set up for cross-border and national mediation. This volume includes national reports on cross-border mediation including in-depth information on all the relevant aspects of cross-border mediation: the notion of cross-border mediation, the law applicable to the mediation clause, the mediation proceedings and the content of the settlement reached by the parties. Special attention is of course given to the recognition and enforcement in the European Union of settlements reached in other Member States and outside Europe. In addition the role of mediators and requirements to become a mediator are examined. This book provides a unique picture of the legal situation in the European Union for cross-border mediation. It is an invaluable instrument for those who want to know more about this complex topic or want to become a mediator in Europe themselves. E?
Carlos Esplugues is Professor of Private International Law and International Trade Law at the University of Valencia. He holds LLMs from the University of Valencia (1982) and Harvard University (1985), an MSc from the University of Edinburgh (1983) and a PhD from the University of Valencia (1983). Professor Esplugues has been President of the Spanish Association of Professors of International Law and International Relations (Asociación Española de Profesores de Derecho Internacional y Relaciones Internacionales) and he is currently the Spanish Delegate to the UNCITRAL ’ s WG II – Dispute Settlement. Professor Esplugues is the co-author of two leading handbooks on International Trade Law and Private International Law in Spain and has hundreds of publications in these two fields, with a special reference to international dispute resolution in the most prestigious journals and editorials. He is regularly invited as a distinguished visiting professor to many leading universities of Europe, Asia and Latin America. He also acts as an international arbitrator and mediator.
PrevNext