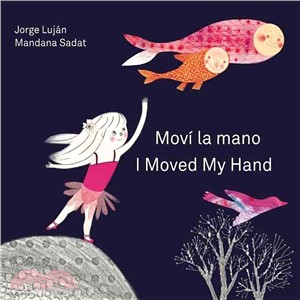 When a little girl moves her hand, she changes the world as she discovers it. As she moves her known world, she discovers her own power and creates everything anew. The poem, written by Argentine poet Jorge Lujan, comes from a culture saturated with magic, in which even the very young can make the world by reaching out and moving it. Mandana Sadat’s imaginative illustrations deepen and enrich the text. Movi la mano / I Moved My Hand is a very special contribution to the world of children’s books for the very young (and the not so young).
Jorge Lujan is a prolific and highly respected author and poet. He has worked with many of the world’s greatest illustrators to create an outstanding body of work. His picture books include Stephen and the Beetle, illustrated by Chiara Carrer, Doggy Slippers and Numeralia, illustrated by Isol, Colors! !Colores!, illustrated by Piet Grobler, Rooster / Gallo, illustrated by Manuel Monroy, and Con el sol en los ojos / With the Sun in My Eyes, illustrated by Morteza Zahedi. He has twice won the Premio de Poesia para Ninos de ALIJA (IBBY Argentina), and he has been nominated for the Astrid Lindgren Memorial Award. He is also an architect and musician. His books, songs, and videos can be found on his website at jorgelujan.com. He lives in Mexico City. Mandana Sadat is an award-winning author and illustrator of children’s books who lives near Paris. She has a diploma in illustration from Les arts decoratifs de Strasbourg and has published many books in Europe, Asia, North America, and South America, including Mon lion and Tarde de invierno. She has exhibited her art in Portugal and Italy, including three times at the Bologna Children’s Book Fair. She lives in Toronto.
PrevNext