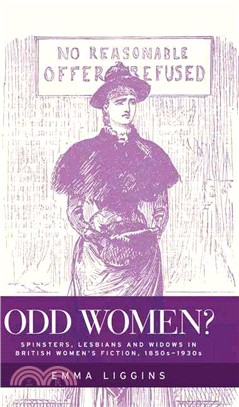 This genealogy of the 'odd woman' compares representations of spinsters, lesbians and widows in British women's fiction and auto/biography from the 1850s to the 1930s.

Women outside heterosexual marriage in this period were seen as abnormal, superfluous, incomplete and threatening, yet were also hailed as 'women of the future'. Before 1850 odd women were marginalised, minor characters in British women's fiction, yet by the 1930s spinsters, lesbians and widows had become heroines. This book examines how women writers, including Charlotte Bronte, Elisabeth Gaskell, Ella Hepworth Dixon, May Sinclair, E.H. Young, Radclyffe Hall, Winifred Holtby and Virginia Woolf, challenged dominant perceptions of singleness and lesbianism in their novels, stories and autobiographies.

Drawing on advice literature, medical texts and feminist polemic, it demonstrates how these narratives responded to contemporary political controversies around the vote, women's work, sexual inversion, and birth control, as well as examining the impact of the First World War.