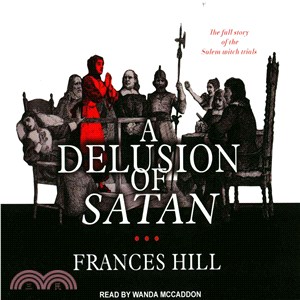 During the bleak winter of 1692 in the rigid Puritan community of Salem Village, Massachusetts, a group of young girls began experiencing violent fits, allegedly tormented by Satan and the witches who worshipped him. From the girls' initial denouncing of an Indian slave, the accusations soon multiplied. In less than two years, nineteen men and women were hanged, one was pressed to death, and over a hundred others were imprisoned and impoverished.
This evenhanded and now-classic history illuminates the horrifying episode with visceral clarity, from the opportunistic Putnam clan, who fanned the crisis to satisfy personal vendettas and greed, to four-year-old "witch" Dorcas Good, who was chained to a dank prison wall in darkness till she went mad. By placing the distant period of the Salem witch trials in the larger context of more contemporary eruptions of mass hysteria and intolerance, the author has created a work as thought-provoking as it is emotionally powerful.
Frances Hill, an accomplished journalist and novelist, has written The Salem Witch Trials Reader and Deliverance from Evil. She lives in London, but visits the United States regularly, spending every summer in Connecticut.
Wanda McCaddon has narrated well over six hundred titles for major audio publishers and has earned more than twenty-five Earphones Awards from AudioFile magazine. She has also won a coveted Audie Award, and AudioFile has named her one of recording's Golden Voices.
PrevNext