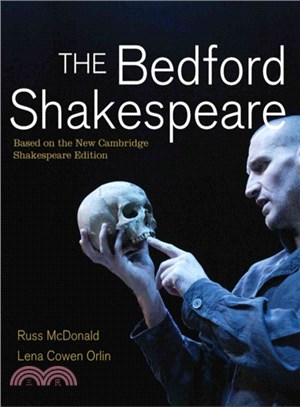 Finally, the collected works you’ve been waiting for: visual, historical, contextualized. Based on the New Cambridge Shakespeare edition of the text, The Bedford Shakespeare gathers the 25 most frequently taught plays and augments them with the rich historical and contextual materials you expect from Bedford/St. Martin’s. Thoughtful, provocative analysis by eminent scholars Russ McDonald and Lena Cowen Orlin offers students concrete entry points into the plays and creates opportunities for lively classroom discussion. A lavish collection of images throughout the book features production shots, paintings, film stills, Renaissance woodcuts, maps, and more, to help students visualize what they are reading.

Russ McDonald is Professor of English Literature at Goldsmiths College, University of London. Having taught at five American universities, he is the winner of multiple awards for distinguished teaching, including North Carolina Professor of the Year. For a decade he helped to direct the NEH-sponsored Teaching Shakespeare Institute for secondary teachers at the Folger Library, and his pedagogical commitment led to his publishing the widely-adopted Bedford Companion to Shakespeare. A specialist in Shakespeare’s poetic language, he has held fellowships from the National Endowment for the Humanities, the Folger Shakespeare Library, and the Mellon Foundation. His scholarly works include Shakespeare’s Late Style, Shakespeare and the Arts of Language, and other books and articles on Shakespeare and early modern writing and culture. In 2010-11 he served as President of the Shakespeare Association of America. He also writes regularly for Opera magazine.
Lena Cowen Orlin is Professor of English at Georgetown University and Executive Director of the Shakespeare Association of America. She serves on the editorial boards of two Shakespeare journals, is co-editor of the Arden Shakespeare Critical Currents Series, and sits on executive committees for the International Shakespeare Association and the International Shakespeare Conference of the Shakespeare Institute in Stratford-upon-Avon. As Executive Director of the Folger Institute at the Folger Shakespeare Library, she developed many programs for college teachers of Shakespeare. She has co-edited Shakespeare: An Oxford Guide and is editor of A Sourcebook for English Studies: The Renaissance. She also publishes on the social, economic, and architectural history of Shakespeare's times and has received fellowships from the Guggenheim Foundation, the National Endowment for the Humanities, the Mellon Foundation, the Folger Library, the Huntington Library, and the Yale Center for British Art. Her books include Private Matters and Public Culture in Post-Reformation England and Locating Privacy in Tudor London.
PrevNext