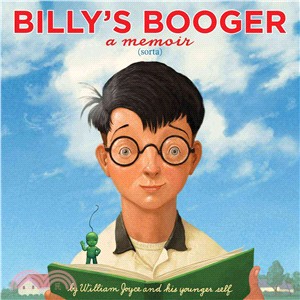 A young lad who would rather draw than do math, spell, or gargle finds the perfect outlet for his always-on imagination in this manifesto to creative joie de vivre, featuring a book within a book, from the brilliant minds that brought you The Fantastic Flying Books of Mr. Morris Lessmore.

Billy loves to draw. He draws on books and on his homework and even on his math tests—he might not get the answer right, but doesn’t it look swell sitting in a boat at sea? His teacher doesn’t think so, and neither does the principal. But the librarian has an idea that just might help Billy better direct his illustrative energies: a book-making contest!

Billy gets right to work, reading everything he can about meteors, mythology, space travel, and…mucus? Yep, his book is going to be about the world’s smartest booger, who stays tucked away until needed—say, to solve multiplication problems, or answer questions from the President. Billy’s sure his story is a winner. But being a winner doesn’t mean you always win.

Full of nostalgic references to a time when TV was black-and-white and Sunday newspapers had things called the funnies, this wildly fun story-within-a-story is based loosely on children’s book legend William Joyce’s third grade year, and includes a sewn-in mini-book of that tale of the world’s smartest booger.

William Joyce does a lot of stuff but children’s books are his true bailiwick (The Guardians, Dinosaur Bob,?George Shrinks, and the #1?New York Times?bestselling?The Fantastic Flying Books of Mr. Morris Lessmore, which is also his Academy Award–winning short film, to name a few). He lives in Shreveport, Louisiana. Talk to William Joyce and look at upcoming work at @HeyBillJoyce on Twitter and Instagram.

Moonbot Studios is a secret, zero-gravity colony in Shreveport, Louisiana, inhabited by interstellar beings. Their mission is to create imaginative books, films, apps, games, and entertainment in this—and any other—dimension. Come see at MoonbotStudios.com!
PrevNext