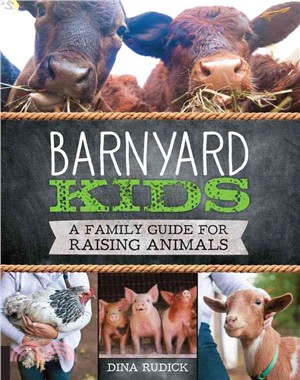 A sustainable source of ideas to help your children learn the ins and outs of agriculture, animal husbandry, and farm to table food options,Barnyard Kids encourages children to get outside, enjoy nature, and reap the benefits of their hard work.

It's time to get your little farmhands dirty. Help them grow to be fruitful, self-sufficient, happy, and healthy!

Dina Rudick is a three-time Emmy Award-winning photographer and videographer who has worked for The Boston Globe for since 2002. During her tenure, the Globe has sent her around the world to cover stories ranging from the tsunami in Southeast Asia to women's health in Haiti the presidential poitics nationwide in multiple campaigns.

In addition to her photo work, Dina helped to lead the Globe photography department's transition to online video. Her initiative proved itself invaluable when she was awarded The Boston Globe's first Emmy Award in 2009. Since then, Dina was awareded two more Emmy Awards in 2012 - for "Outstanding Documentary" and "Outstanding Photographer - No Time Limit."

Dina has also done extensive documentary work in other countries, including Pakistan, Bolivia and Haiti, and her first documentary, Practice: Change - The Africa Yoga Project Story - has been screened at numerous film festivals across the country and recently earned the 2012 New England Emmy Award for "Oustanding Documentary."

In addition to her photo and video pursuits, Dina and her husband, photojournalist Erik Jacobs, have their sights set on creating the farm of their dreams, and Erik will be attending "Farm School" in Athol, Massachusetts, in the fall. You can read all about it on their website: www.ploughandstarsfarm.com.