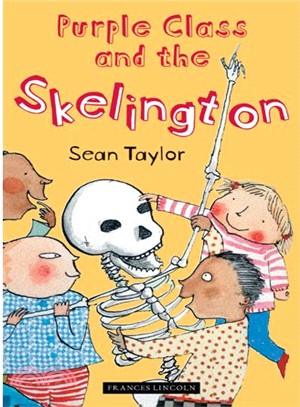 Purple Class is sure Mr Wellington must have died when they find a skeleton sitting in his chair. What will they say to the school inspector?

Meet Purple Class. Yasmin thinks she sees the ghost of the Green Lady who haunts the school looking for first years to kill with scissors. Surely the old and mean-looking lady in the green dress is the spectre herself - or maybe she's just Orange class's substitute teacher. Has Mr Wellington died? Purple class is sure he must have done when they find a skeleton sitting in his chair. Is this Mr Wellington's skelington? What will they say to the school inspector? This collection of stories is a perfect blend of cultural cross-fertilisations, imaginative flights of fancy, drama and humour.

Helen Bate is an exciting and versatile illustrator, who previously qualified as an architect. Her work for Frances Lincoln includes the Purple Class stories by Sean Taylor. She is also the publisher of Pictures to Share, a series of illustrated books for people with dementia. Her picture book ABC UK by James Dunn was nominated for the Kate Greenaway Medal. She currently lives in Cheshire, U.K.

Joyce Dunbar was born and brought up in Lincolnshire. She taught English for 20 years before becoming a full-time writer. Her books for children include This is the Star, which in 1996 became a world-wide best-seller, and Mundo and the Weatherchild, which was runner-up for the 1985 Guardian Children's Fiction Award. The popular Mouse and Mole series has been animated for television with the voices of Alan Bennett and Richard Briers. She lives in Norwich.

Sean Taylor is a children's author, storyteller and teacher with experience of creative writing teaching in three continents. His books include The Great Snake, Purple Class and the Skelington, Purple Class and the Flying Spider, Crocodiles Are the Best Animals of All, The Grizzly Bear with the Frizzly Hair, Who Ate Auntie Iris and We Have Lift-Off. He lives partly in England and partly in Brazil where his wife is from.