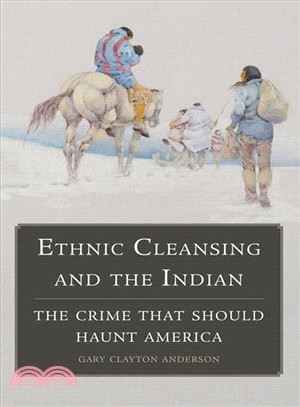 Mention ethnic cleansing” and most Americans are likely to think of sectarian” or tribal” conflict in some far-off locale plagued by unstable or corrupt government. According to historian Gary Clayton Anderson, however, the United States has its own legacy of ethnic cleansing, and it involves American Indians.

In Ethnic Cleansing and the Indian, Anderson uses ethnic cleansing as an analytical tool to challenge the alluring idea that Anglo-American colonialism in the New World constituted genocide. Beginning with the era of European conquest, Anderson employs definitions of ethnic cleansing developed by the United Nations and the International Criminal Court to reassess key moments in the Anglo-American dispossession of American Indians.

Euro-Americans’ extensive use of violence against Native peoples is well documented. Yet Anderson argues that the inevitable goal of colonialism and U.S. Indian policy was not to exterminate a population, but to obtain land and resources from the Native peoples recognized as having legitimate possession. The clashes between Indians, settlers, and colonial and U.S. governments, and subsequent dispossession and forcible migration of Natives, fit the modern definition of ethnic cleansing.

To support the case for ethnic cleansing over genocide, Anderson begins with English conquerors’ desire to push Native peoples to the margin of settlement, a violent project restrained by the Enlightenment belief that all humans possess a natural right” to life. Ethnic cleansing comes into greater analytical focus as Anderson engages every major period of British and U.S. Indian policy, especially armed conflict on the American frontier where government soldiers and citizen militias alike committed acts that would be considered war crimes today.

Drawing on a lifetime of research and thought about U.S.-Indian relations, Anderson analyzes the Jacksonian Removal” policy, the gold rush in California, the dispossession of Oregon Natives, boarding schools and other benevolent” forms of ethnic cleansing, and land allotment. Although not amounting to genocide, ethnic cleansing nevertheless encompassed a host of actions that would be deemed criminal today, all of which had long-lasting consequences for Native peoples.