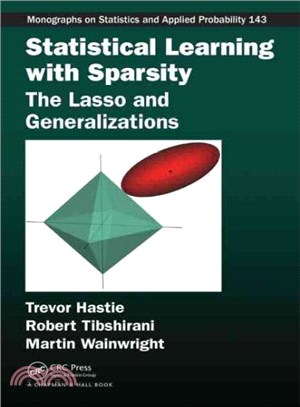 A sparse statistical model has only a small number of nonzero parameters or weights; therefore, it is much easier to estimate and interpret than a dense model.Statistical Learning with Sparsity: The Lasso and Generalizations presents methods that exploit sparsity to help recover the underlying signal in a set of data.

Top experts in this rapidly evolving field, the authors describe the lasso for linear regression and a simple coordinate descent algorithm for its computation. They discuss the application ofl1 penalties to generalized linear models and support vector machines, cover generalized penalties such as the elastic net and group lasso, and review numerical methods for optimization. They also present statistical inference methods for fitted (lasso) models, including the bootstrap, Bayesian methods, and recently developed approaches. In addition, the book examines matrix decomposition, sparse multivariate analysis, graphical models, and compressed sensing. It concludes with a survey of theoretical results for the lasso.

In this age of big data, the number of features measured on a person or object can be large and might be larger than the number of observations. This book shows how the sparsity assumption allows us to tackle these problems and extract useful and reproducible patterns from big datasets. Data analysts, computer scientists, and theorists will appreciate this thorough and up-to-date treatment of sparse statistical modeling.

Trevor Hastie is the John A. Overdeck Professor of Statistics at Stanford University. Prior to joining Stanford University, Professor Hastie worked at AT&T Bell Laboratories, where he helped develop the statistical modeling environment popular in the R computing system. Professor Hastie is known for his research in applied statistics, particularly in the fields of data mining, bioinformatics, and machine learning. He has published five books and over 180 research articles in these areas. In 2014, he received the Emanuel and Carol Parzen Prize for Statistical Innovation. He earned a PhD from Stanford University.

Robert Tibshirani is a professor in the Departments of Statistics and Health Research and Policy at Stanford University. He has authored five books, co-authored three books, and published over 200 research articles. He has made important contributions to the analysis of complex datasets, including the lasso and significance analysis of microarrays (SAM). He also co-authored the first study that linked cell phone usage with car accidents, a widely cited article that has played a role in the introduction of legislation that restricts the use of phones while driving. Professor Tibshirani was a recipient of the prestigious COPSS Presidents’ Award in 1996 and was elected to the National Academy of Sciences in 2012.

Martin Wainwright is a professor in the Department of Statistics and the Department of Electrical Engineering and Computer Sciences at the University of California, Berkeley. Professor Wainwright is known for theoretical and methodological research at the interface between statistics and computation, with particular emphasis on high-dimensional statistics, machine learning, graphical models, and information theory. He has published over 80 papers and one book in these areas, received the COPSS Presidents’ Award in 2014, and was a section lecturer at the International Congress of Mathematicians in 2014. He received PhD in EECS from the Massachusetts Institute of Technology (MIT).